BSL is an IT company known for being open. Open about our technology, and our planning, keeping clients updated throughout our projects. And our “Bright Stories” campaign is another example of this openness. Your chance to get to know some of the individuals that make up the Bright Side of Software. This week, the spotlight is on one of our software developers: Jurjen Schröder. An opportunity for you to meet Jurjen and his unusual housemates.

Back in January, we introduced our Bright Stories. Employing a series of behind-the-scenes films and blog posts, we want to tell you more about some of our employees and show how each contributes to our success. First it was Eric’s turn in the spotlight. Today it’s the turn of Jurjen.

Jurjen has been working at BSL as a software developer for about two years now. Having gone to the same high school as Geoffrey Simpson (son of Martyn and Michele), he’d already heard of the Bright Side of Life, and so it was a strange coincidence when he first joined BSL via a secondment. An instant click between Jurjen and BSL meant that Jurjen joined the team at the end of his assignment.

I think the diversity of the work at BSL is a big plus. I work on various Java projects, but also on projects in different languages and environments. For example, the Documentation Portal development for WCC, written using Drupal and PHP. It’s great to keep discovering something new!

A few years ago, Jurjen was not yet a software developer. He was on a completely different path: he’d just completed his master’s degree in Social Psychology. But when he started looking around for jobs with his diploma in his pocket, he discovered that none of the available options appealed very much. Not one for sitting still, Jurjen took the opportunity to look for other options.

I decided to follow a Java training, and I was enthusiastic from the word go. I just enjoy the challenge of solving puzzles to reach the result I want. And the advantage of programming is that you get feedback on your actions almost immediately.

It was the right choice. Jurjen enjoys automating (routine) tasks and processes. “However, you have to be careful not to spend more time on optimizing and automating processes than it would cost to do it manually! There is such a thing as the law of diminishing returns, so it’s handy to know when to stop. That’s where help from my colleagues is really valuable.” 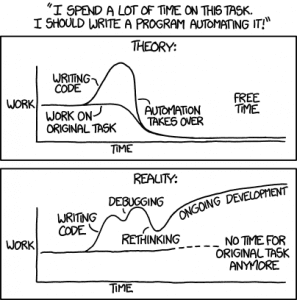 As you can see in the video, when Jurjen comes home, he’s responsible for some very unusual animals: his Axolotls. And it turns out that these creatures have a unique characteristic: they can regenerate! Limbs, and even organs, can grow back without scars if they are injured! This feature was the deciding factor for Jurjen, who tracked down a dealer on Marktplaats. He found himself in a barn, with a variety of young Axolotls on display in plastic containers. He chose a few, taking them home in a storage box, before putting them into an aquarium at home.

Filming Axolotls presents a few challenges. They don’t like much light, and so often hide amongst the driftwood in their aquarium. But even though bright lights were used during the filming, they came out for the camera! We got some great sequences.

The promise of a tasty worm played a role in overcoming their shyness. Axolotls usually enjoy more simple fare, such as red mosquito larvae. However, worms are a real treat for them. And for us too, as it provides some spectacular images. They don’t have any teeth, so are unable to chew. As a result, the worms are sucked up and swallowed whole!

Would you like to know how our software developers can help with your next project? Do you have an urgent software question? Jurjen and his colleagues will be happy to help you – and of course, the coffee is always ready!

Do you want to get an estimate for developing your custom software. Or advice on creating new websites, or integrating web applications with existing systems. We're happy to answer any questions you may have, no strings attached. Give us a call, or get in touch at sales@brightside.nl!