Delve into our background: Browse through a selection of our projects based on our skills and see some of the innovative software, applications and web services we have created for and with our clients. We develop for many platforms and work with Windows, UNIX, Linux and OS X servers. Literatuurplein.nl is a unique concept created by Jef van Gool. Most of all it’s an extensive website which stimulates interest in Dutch Literature and promotes an interest in reading. Together with the software company “the Dutch Republic“, they launched a first version of Literatuurplein back in 2004. Unfortunately, the site didn’t meet their expectations, so they turned to BSL for advice. We were asked to investigate how the software was written and to suggest how it could be improved. Our advice was:

The client took this advice to heart. As a result they decided to rebuild the product, and they asked BSL to carry out the work. We designed and developed a completely new Literatuurplein over a period of 4-5 months. The new site was an immediate success. Furthermore, due to the good partnership, we’ve continued to work on many follow-up projects. First of all adding many new features, but also modifying the site as the library infrastructure and standards changed. 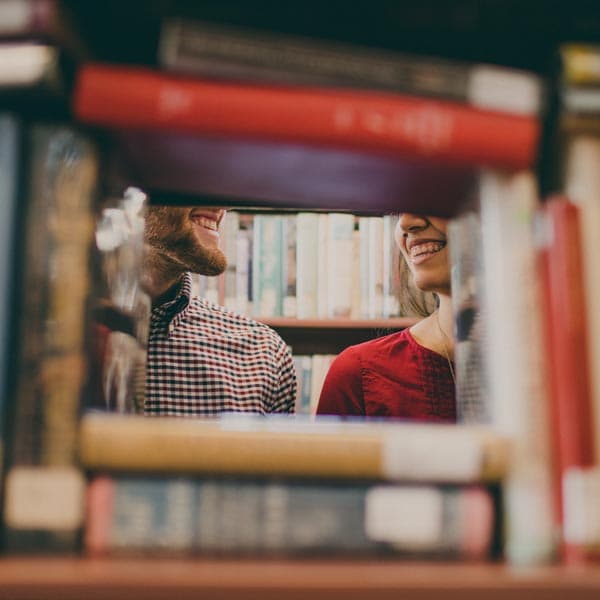 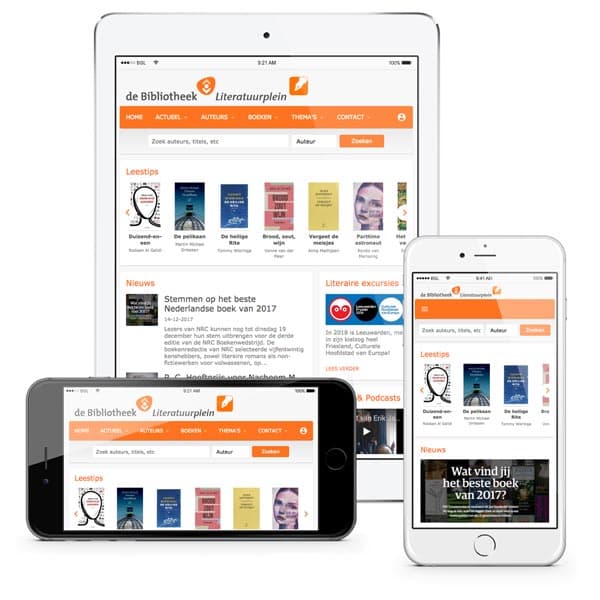 Move with the times

During the development of a new Literatuurplein.nl we switched to an Oracle database and Oracle Text. The use of Oracle Text enabled us to introduce an intelligent search engine, making content in the site easier to maintain and to find. In the years that followed, our developers have continuously improved the technology and infrastructure of the website.

In 2015 Literatuurplein was taken over by the Royal Library (KB). Their first priority was to integrate the BNL infrastructure within their organization. At the end of 2016, KB asked us to update the site so that it meets current standards. Most noteworthy, the site became fully responsive – easy to use on both mobiles and desktop browsers.

Move with the times

During the development of a new Literatuurplein.nl we switched to an Oracle database and Oracle Text. The use of Oracle Text enabled us to introduce an intelligent search engine, making content in the site easier to maintain and to find. In the years that followed, our developers have continuously improved the technology and infrastructure of the website.

In 2015 Literatuurplein was taken over by the Royal Library (KB). Their first priority was to integrate the BNL infrastructure within their organization. At the end of 2016, KB asked us to update the site so that it meets current standards. Most noteworthy, the site became fully responsive – easy to use on both mobiles and desktop browsers.

“BSL believes it is important to keep up with current trends and developments. With more than four million visitors a year, Literatuurplein is an intensively used website. Therefore it’s important that the site is accessible by all users. Since the use of  site on mobile devices is increasing, creating a fully responsive website was our number one priority.”

Front-end Developer , Bright Side of Life

Literatuurplein has been a well-known and established name in the world of Dutch literature for years. The website attracts no fewer than 4,000,000 visitors annually. Literatuurplein now contains information describing more than 700,000 books, and more than 320,000 authors. There are more than 3,500 news items to be found.

New articles are added each day, and new titles are imported and updated using sources such as NBD Biblion and Centraal Boekhuis automatically. In addition, a team of editors adds new content such as reviews, columns, podcasts and videos. Because of the extensive literary agenda, Literatuurplein visitors are always aware of literary events and radio and TV programs with literature as their theme.

“With regard to technical development and infrastructure management, The Bright Side of Life in Breukelen has been a particularly constructive and creative partner for all these years.”

At BSL, you’re at the right address for…

BSL has a broad experience in developing complex online database solutions. This expertise came in handy during the management of the contents of Literatuurplein. Literary databases are often very complex…

It is important that websites go along with current trends and developments. Even the most beautiful and technical websites are not up-to-date after a few years. That is why it is important to update the technical aspects of the website after a number of years. This is the perfect time to take a critical look at the design and content of the website. Are there functions that are missing or functions that are used too little?

When a software product has gone into production, users often need support and maintenance for the longer term. That is why we offer our customers a range of flexible support services. In the case of Literatuurplein this means 7 days a week support to the KB and its Literatuurplein users.

You’re welcome to get in touch with me if you have a project in mind, or want to discuss how best to approach your next development project.

Relations Manager, Bright Side of Life 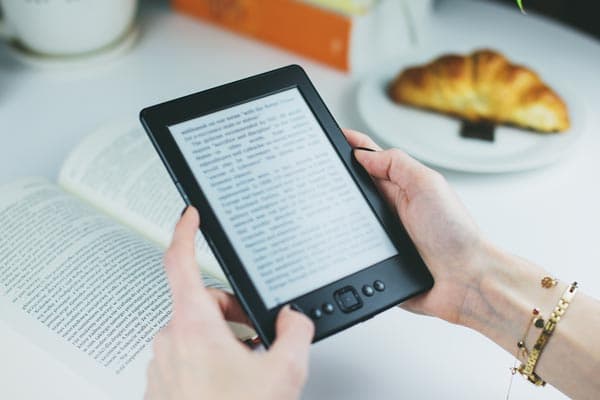 The Dutch National Library service (now part of Koninklijke Bibliotheek, formerly Stichting Bibliotheek.nl) aims to give everyone free and easy access to information, knowledge and culture. Dutch libraries have the most complete and extensive collection of titles available in the Netherlands. Since January 2014, users have also been able to borrow and read e-books on their mobile devices. END_OF_DOCUMENT_TOKEN_TO_BE_REPLACED 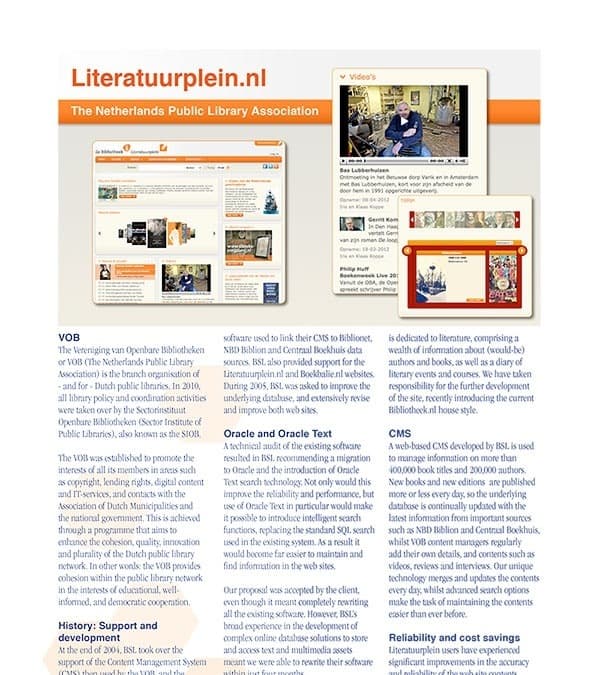 The Netherlands Public Library Association promotes the interests of its members, including management of its flagship Literatuurplein web site (Literatuurplen.nl). At the start of the project BSL completely rewrote the software and improved the underlying database using high-performance search technology. We added new features to make the site even more user-friendly. Our journey didn’t end there – we have since added many different content types, creating a unique title database, and a custom CMS designed specifically for the Public Libraries editorial team. The site now provides web services and title information to many libraries throughout the Netherlands.
END_OF_DOCUMENT_TOKEN_TO_BE_REPLACED 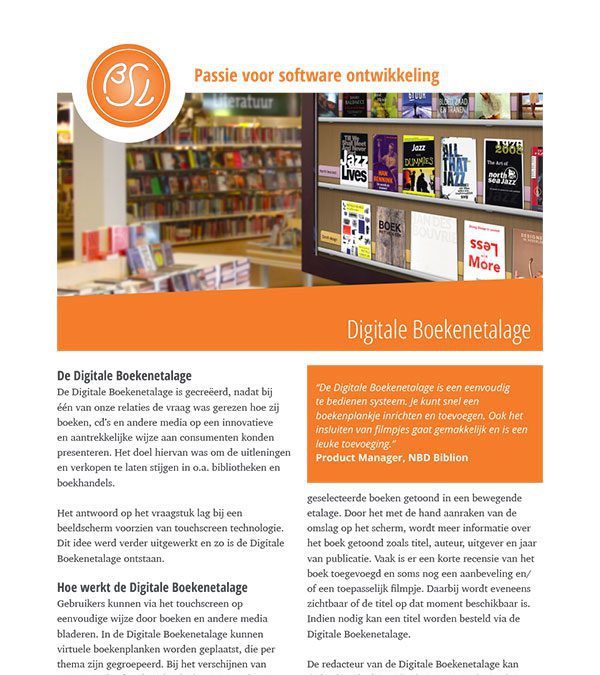 In 2009, BSL was asked to create a so-called ‘Digital Showcase’ – Rotunda. The goals: promote sales in bookshops, and encourage lending in libraries. How? By presenting books, CDs, and other media in an attractive and innovative way, using touchscreens. Using these screens, library and bookstore visitors can browse through virtual bookshelves – simply using hand gestures. Rotunda was born. END_OF_DOCUMENT_TOKEN_TO_BE_REPLACED 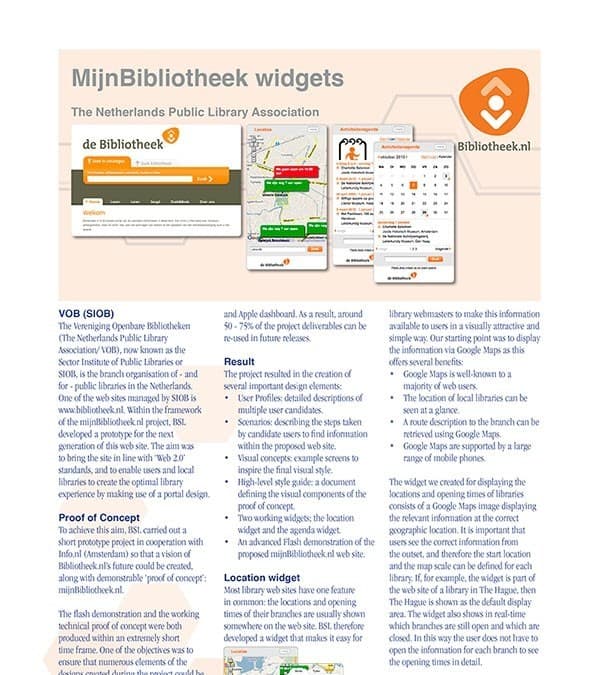 A BSL-developed prototype for the next generation of the mijnBibliotheek.nl website aims to bring the existing site in line with ‘Web 2.0’ standards, and to enable users/ local libraries to create an optimal library experience. A widget showing the location of libraries and their opening times within a Google Maps page was one of the initial developments. We went on to develop more than 40 different widgets for integration within local library sites. END_OF_DOCUMENT_TOKEN_TO_BE_REPLACED

Bright Side of Life

Customers with operational support contracts should make use of the special contact number for the BSL “out-of-hours” help desk. This service is available 24 hours a day, seven days per week.

For all your questions and comments:
bslsec@brightside.nl

For demonstrations of BSL products and commercial queries:
sales@brightside.nl